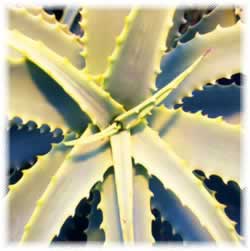 How to Use: Aloe 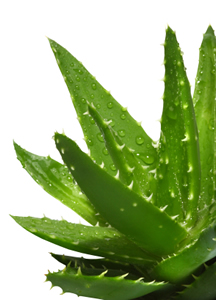 Aloe gel skin care: Aloe vera gel is an indispensable part of your herbal dispensary. The leaf juices of the aloe plant have important medicinal uses making aloe one of the most respected medicinal plants found in many gels, creams and lotions. Modern researchers have identified several reasons why aloe gel spurs wound healing: It has antibacterial, antifungal and antiviral compounds that help prevent wound infections. It also has immune-stimulating and anti-inflammatory compounds, and it stimulates collagen synthesis and skin regeneration after a burn. Aloe gel contains vitamins C and E, plus the mineral zinc. Aloe vera gel is soothing, anti-inflammatory, and antibacterial - helps heal acne, improve the appearance of wrinkles, and hydrate damaged skin. Applying a thin layer of aloe vera gel will help ease discomfort caused by painful skin irritations, and acne. 6

Aloe Juice Uses and Side Effects: Aloe juice is also thought to improve digestion and cleanse the digestive tract. Many believe that aloe juice stimulates insulin production and prevents high triglycerides. Aloe juice has a long history of use for diabetes that has recently show promise in studies, but keep in mind that these internal uses of aloe have much less of a proven basis in scientific fact than the external use in gel form. Make sure that any Aloe juice products you consume have not be sourced from outer leaves which can contain dangerous chemicals. 3,4,5

Aloes is the term used for the evaporated liquid exuded from the cut leaf bases of Aloe ferox, the Cape Aloe, and Aloe vulgaris from North Africa. Strong doses have a drastic effect and should never be given during pregnancy. The use of Aloes in herbal medicine is limited due to these side effects and the wide availability of safer alternatives. (Weiss, Rudolf Fritz M.D.)

Aloe vera gel for Pet care : Aloe will bring cooling relief to fleabites, reducing itching and scratching and is safe to use on dogs and cats. It also has immune-stimulating and anti-inflammatory compounds. Acemannan, a chemical compound found in Aloe Vera as a powerful immunostimulant in animals, particularly in cats. 2

Preparation Methods & Dosage :The freshest aloe is of course, from your own plant. Apply aloe gel directly to skin for cooling relief to dry, itchy skin, minor burns and rashes. Commercial aloe skin care products (containing stabilized aloe) rarely, if ever, pack the therapeutic punch of fresh aloe because they no longer contain any tannins, and are mostly adulterated with alcohol. You can also incorporate aloe in homemade lotions, and use it as a carrier for essential oils. Add a few drops of Chamomile and/or Lavender oil for burns and scalds.

Called kumari meaning virgin, aloe is used internally in Ayurveda to restore youthful vitality and as a female tonic.

Aloe Side Effects: Drug aloes is a strong purgative that should be used very cautiously and not to be used during pregnancy or while nursing. Aloe bitters and aloe juice should not be taken internally during pregnancy. The laxative compounds in aloe are passed into mother's milk, so nursing mothers should avoid internal use of aloe.4 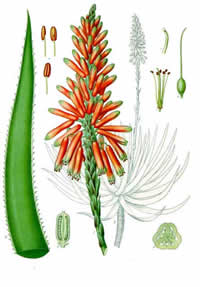 Aloe looks like a cactus, but is actually a member of the lily family, a tender tropical, native to Africa.

How to Grow Aloe

You can grow aloe as a houseplant, in fact is it wise to do so. Not only does an aloe plant provide quick relief from a burn or scald, the potted plants have been shown to remove formaldehyde from tainted indoor air.