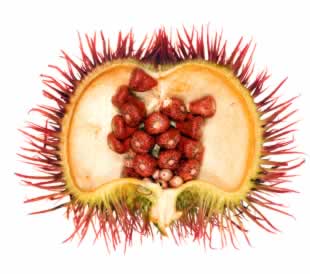 How to Use: Annatto

Annatto has been used for centuries to preserve and flavor food. Annatto is considered to be mainly a culinary spice, though it does have some traditional medicinal uses that have recently been confirmed by science. Laboratory tests show that annatto extracts inhibit the growth of bacteria, and Annatto also contains very high concentrations of carotenoids, chemicals in the same class as alpha- and beta-carotene that may explain it's antioxidant properties. 1

Annatto is growing in popularity as a natural alternative to synthetic food coloring compounds. The intense red color of the seed is due to bixin in the seed coat. The seeds are used in cooking to impart a rich yellow color and can be used inexpensive substitute for saffron. They add a mild, distinctive flavor to foods such as rice, sauces, cheeses, fish, and salad oil. Annatto is widely used in Caribbean and Latin cuisines. Recado rojo or achiote paste is a popular blend of spices from Yucatán region of Southern Mexico that usually includes annatto, Mexican oregano, cumin, clove, cinnamon, black pepper, allspice, garlic, and salt. The annatto seeds give this traditional seasoning mix a distinctive red hue.

Preparation Methods & Dosage :Seeds are ground and mixed with other spices, or fried in oil

In the Kitchen: Cover seeds with water and simmer for five minutes. Turn off the heat and soak in water for an hour. Cool before grinding. You can also fry the seeds in oil for a few minutes, discard the seeds and use the oil for flavor and coloring. Cover the pan as the seeds will pop. Annatto flavored oil can be refrigerated for a few weeks, but the flavor is best fresh

Annatto Side Effects: None noted 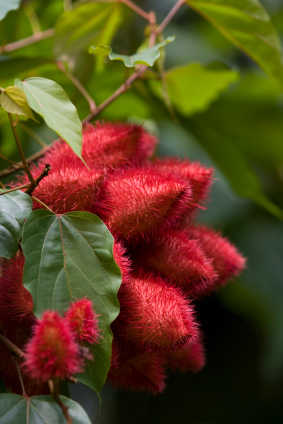 Annatto was used by the Mayans and North American native tribes as body paint. The Aztecs also may have used annatto to flavor and color drinking chocolate.