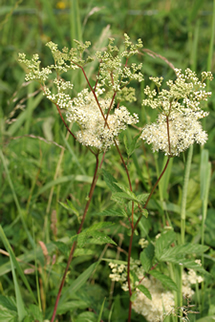 How to Use: Meadowsweet

Meadowsweet is a mild, but effective anti-inflammatory herb used to treat arthritis and other aches and pains. Meadowsweet leaves and flowers contain salicylates, compounds that are converted by the body to aspirin. Meadowsweet is especially helpful for those arthritis sufferers who have gastritis, (inflammation of the stomach lining) from years of taking NSAIDs. While it may seem contradictory at first, since aspirin and salicylates are know for causing stomach upset, but years of observation and historic use confirm that meadowsweet is effective in a wide range of digestive problems, including diarrhea in children3. This makes a strong case for the whole herb being much more than just the sum of its "active" ingredients.1

Preparation Methods & Dosage :Meadowsweet can be taken in teas, as an extract or in capsules.

Meadowsweet Side Effects: Not for those with sensitivity to aspirin (salicylates). For the same reason, it should not be used by children under the age of sixteen with high fevers, because of the rare but very real risk of Reyes syndrome. May compound the effects of prescription blood thinners, do not take if you have any internal bleeding problems. 1,4 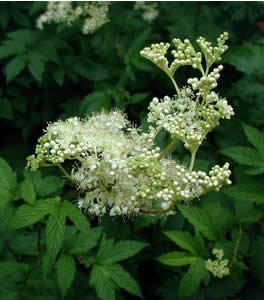 Fleecy white plumes of meadow-sweet, the "spires of closely clustered bloom" sung by Dora Read Goodale, are surely not frequently found near dusty "waysides scorched with barren heat," even in her Berkshires; their preference is for moister soil, often in the same habitat with a first cousin, the pink steeple-bush. But plants, like humans, are capricious creatures. If the meadow-sweet always elected to grow in damp ground whose rising mists would clog the pores of its leaves, doubtless they would be protected with a woolly absorbent, as its cousins are. Inasmuch as perfume serves as an attraction to the more highly specialized, aesthetic insects, not required by the spiraeas, our meadow-sweet has none, in spite of its misleading name. Small bees, flies, and beetles, among other visitors, come in great numbers, seeking, the accessible pollen, and, in this case, nectar also, secreted in a conspicuous orange-colored disk. Netje Blanchan. Wild Flowers worth Knowing (1917)

The meadowsweet is one of the best known wildflowers, its virtues have been known since the time of Dioscorides. The fragrant creamy white flowers have an almond scent of which Gerard writes "for the smell thereof makes the heart merrie and joyful and delighteth the senses". 2

In 1897, Felix Hoffmann created a synthetically altered version of salicin, derived from the species, which caused less digestive upset than pure salicylic acid. The new drug, formally acetylsalicylic acid, was named aspirin by Hoffman's employer Bayer AG after the old botanical name for meadowsweet, Spiraea ulmaria. This gave rise to the class of drugs known as non-steroidal anti-inflammatory drugs (NSAIDs).4


This sweetly scented flower commonly named "bridal wort" was popular in bridal bouquets, thought to bring love, joy, a beautiful wedding day, and a happy marriage. It was one of the three sacred herbs renowned by Druids, along with vervain and water-mint.

Jupiter is the regent of the Meadow-Sweet. The flowers are alexipharmic and sudorific, likewise astringent, binding, and useful in fluxes of all sorts.
Nicholas Culpeper, 1653