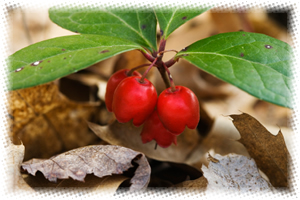 How to Use: Wintergreen

In the Gaultheria species salicylate is present predominantly as a conjugate of methyl salicylate and glucose called gaultherin. The leaves and berries produce the Oil of wintergreen which is the source of the distinctive and familiar 'medicinal' smell. Some species of birch, Betula lenta - Sweet Birch or Cherry Birch, also produce oil of wintergreen. Commercial methyl salicylate is now synthesized and used in many OTC topical pain relief preparations. 2

Because of the toxicity of methyl salicylate many aromatherapists do not recommend it's use. The benefits may outweigh the risks in cases of debilitating pain as long as you are not sensitive to salicylates and use wintergreen oil with caution. Wintergreen is a powerful and useful oil that I have used with success as a topical analgesic on my tough arthritis pain. Making your own homemade pain rubs gives you tighter control over dosing.

Gaultheria procumbensis one of the richest sources of salicylic acid compared to other plants 1 including Salix spp. (willow), Betula spp. (birch), many poplars, and Viburnum prunifolium (black haw). 1

Preparation Methods & Dosage :Use the essential oil in pain relieving oils and creams. Always use well diluted and only use occasionally.

The minty sweet scent of wintergreen is familiar to anyone who has ever used Bengay©, or other OTC ointments and rubs. The essential oil from the leaves is highly irritating to skin, and should be only used well diluted in carrier oil and ointments for pain rubs. Wintergreen contains methyl salicylate, which can become toxic at high doses.

Wintergreen Side Effects: Very potent skin irritation. Keep out of reach of children. For external use only. Dilute properly; Avoid if pregnant.Harmful or fatal if taken internally. As little as one teaspoon can be fatal if ingested by a child. Use sparingly,as the active phytochemical, methyl Salicylate is toxic in large doses. 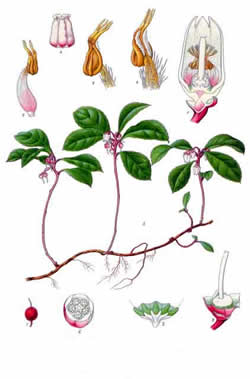 Omnivorous children who are addicted to birch-chewing prefer these tender yellow-green leaves tinged with red, when newly put forth in June - "Youngsters" rural New Englanders call them then. In some sections a kind of tea is steeped from the leaves, which also furnish the old-fashioned embrocation, wintergreen oil. Late in the year the glossy bronze carpet of old leaves dotted over with vivid red "berries" invites much trampling by hungry birds and beasts, especially deer and bears, not to mention well-fed humans. Coveys of Bob Whites and packs of grouse will plunge beneath the snow for fare so delicious as this spicy, mealy fruit that hangs on the plant till spring, of course for the benefit of just such colonizing agents as they. Quite a different species, belonging to another family, bears the true partridge-berry, albeit the wintergreen shares with it a number of popular names.

The partridge berry, or Teaberry, was used by the American Indians for pain and fever. In the nineteenth century wintergreen was considered a cure-all. 2