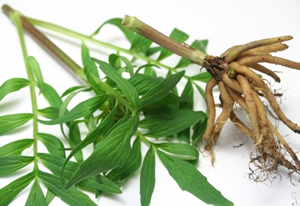 How to Use: Valerian

Valerian is without doubt the most widely recognized herbal sedative. It is used by herbalists for insomnia, nervous anxiety and to help the body relax in the presence of pain. Although valerian is potent, and has an effect similar to drugs like Valium,85 it is neither habit-forming nor addictive. Valerian puts you to sleep but doesn't cause a morning hangover, interact with alcohol, or lead to addiction. Research shows that extracts of the root not only help you fall asleep faster but also improve sleep quality. Valerian has a tonic effect on the heart when used in combination with hawthorn. 86. Valerian herb can also calm coughs when used in combination with mullein, and lemon balm. 87Valerian relaxes smooth muscles making it an idea remedy for cramps. 88

Preparation Methods & Dosage :Valerian can be made into tea, taken in capsules, or used as an extract.

Valerian oil is steam distilled from the root, and is used in similar ways as the whole herb

Valerian Side Effects: Generally considered safe, large amounts can cause stomach upsets. In about 5 percent of the population, valerian acts as a stimulant, be aware of this effect if you are new to the herb. 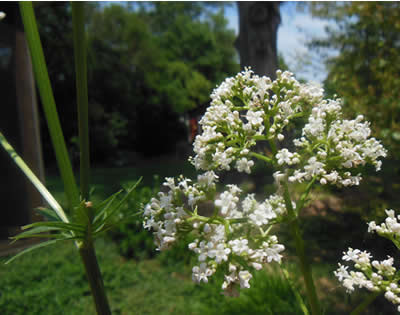 Valerian flower head
An attractive fern-like plant with fragrant pinkish flowers, the roots which hold the medicinal value are earthy , strong and pungent. There are several native species throughout North America, with size being the primary difference among them. The domestic plant can reach five feet in height and features lance-shaped leaves that get progressively smaller at the top. Flowers are borne in branched clusters of small white to pink blossoms. Once you become familiar with this plant, identification is as easy as scratching a root to release the unmistakable odor.

How to Grow Valerian

Valerian is easy to grow from seed, you can sow directly into warm garden soil, or transplant in early summer. Sun or shade, moist soil. The plant can reach heights of 5 feet or more with plenty of sun and water. The whole plant is fragrant, the leaves smell lightly of cinnamon and vanilla, the root has its own musty, potent aroma.

The word Valerian occurs in the recipes of the Anglo Saxon leeches (eleventh century). Valeriana, Amantilla and Fu are used as synonymous in the Alphita, a medieval vocabulary of the important medical school of Salernum. Saladinus of Ascoli (about 1450) directs the collection in the month of August of radices fu, id est Valerianae. Referring to the name Amantilla, by which it was known in the fourteenth century, Professor Henslow quotes a curious recipe of that period, a translation of which runs as follows: 'Men who begin to fight and when you wish to stop them, give to them the juice of Amantilla id est Valeriana and peace will be made immediately.' M. Grieve
Valerian is sedative to humans, but excites both cats and mice. In the legend of the Pied Piper of Hamlin, he baited the rodents with valerian to drive them out of the city. The flowers are used in charm bags to encourage love, protection and sleep.