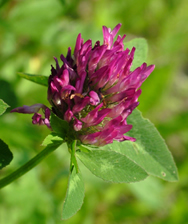 How to Use: Red Clover

Red clover contains an impressive array of vitamins and trace minerals in synergy with many active medical compounds, including a strong concentration of isoflavones. Isoflavones are a type of flavonoids found in plants that act like estrogen in mammals. These isoflavones are also found in many plants in the (FABACEAE) or pea family like soybeans, red clover, alfalfa, garden peas, beans, licorice and kudzu. These phytoestrogens exert a weak estrogenic effect due to their ability to bind estrogen receptors. This is of special interest to women in relieving the symptoms of menopause and providing protection against osteoporosis by helping to maintain bone density. These compounds have shown promise in studies for their protective effects against cancer of the breast. 1

Red clover maintains a strong following among traditional herbalists as a blood purifying depurative that has been used safely and effectively for hundreds, if not thousands of years in clinical practice. Red clover has been used traditionally to treat respiratory and skin problems such as cases of childhood eczema, and can be effective for other chronic skin conditions as well. 2

Preparation Methods & Dosage :Red clover makes an excellent tea, especially sweetened with clover honey. You can also take red clover as an extract, or in capsule form. Red clover is often combined with black cohosh in herbal formulas for menopause. Externally a cooled tea or poultice can be applied to dry, itching skin.

Red Clover Side Effects: Safe in normal amounts, but consult a physician if you are pregnant or nursing. Pregnant animals have had miscarriages after grazing heavily on clover. 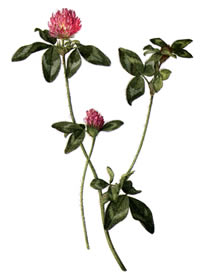 Meadows bright with clover-heads among the grasses, daisies, and buttercups in June resound with the murmur of unwearying industry and rapturous enjoyment. Bumblebees by the tens of thousands buzzing above acres of the farmer's clover blossoms should be happy in a knowledge of their benefactions, which doubtless concern them not at all. They have never heard the story of the Australians who imported quantities of clover for fodder, and had glorious fields of it that season, but not a seed to plant next year's crops, simply because the farmers had failed to import the bumblebee. After her immigration the clovers multiplied prodigiously. No, the bee's happiness rests on her knowledge that only the butterflies' long tongues can honestly share with her the brimming wells of nectar in each tiny floret. Children who have sucked them too appreciate her rapture. If we examine a little flower under the magnifying glass, we shall see why its structure places it in the pea family. Bumble­bees so depress the keel either when they sip, or feed on pollen, that their heads and tongues get well dusted with the yellow powder, which they transfer to the stigmas of other flowers; whereas the butterflies are of doubtful value, if not injurious, since their long, slender tongues easily drain the nectar without depressing the keel.


Once used to ward off witches and other evil forces, finding a four leaved clover has always been considered a lucky charm. Tradition holds that clover is the favorite plant of the fairies. Holding clover in your hand is thought to gain you "fairy sight" (the ability to see the fairies.)